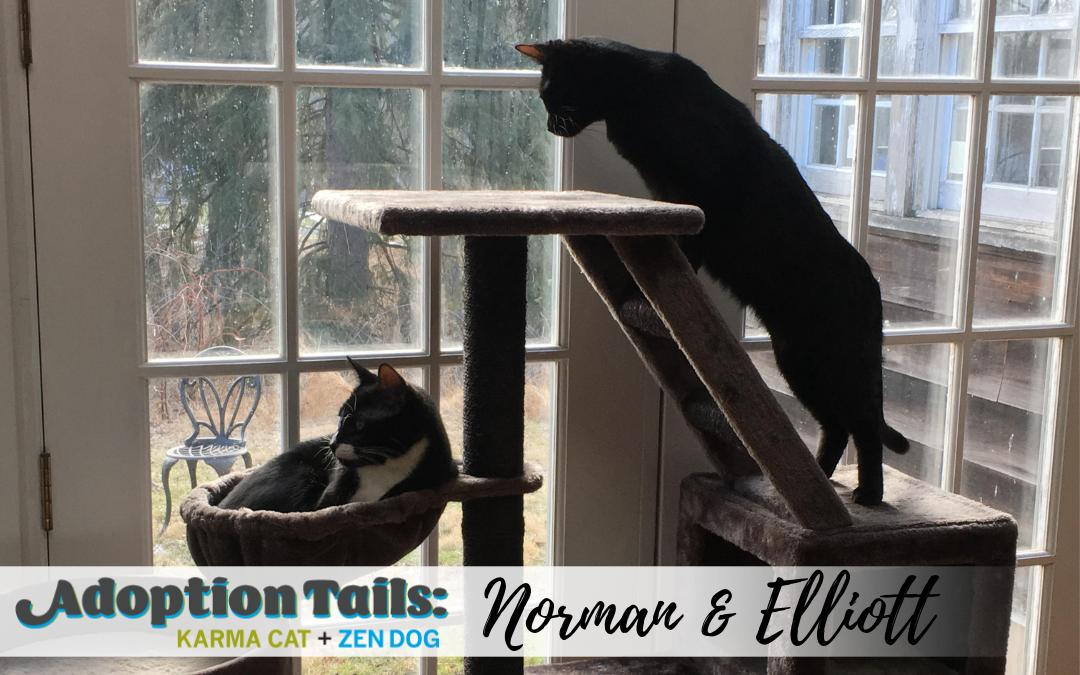 Welcome to the eighth edition of Adoption Tails, our blog series that highlights YOUR pet’s story!

Today we have story full of brotherly love! Get ready to hear all about Norman and Elliott’s (formerly known as Gideon and Gabriel) adoption tale, as told by their cat parents, Susan and Thomas.

When did you adopt Norman and Elliott?

How old were Norman and Elliott when you adopted them, and how old are they now?

When we adopted them, they were one year old, almost to the day! Now they are a year-and-a-half old.

What motivated you to adopt Norman and Elliott?

We are former city dwellers, and we had just a year ago purchased our first home in the suburbs of Morris County. We had discussed getting a pet back and forth several times, but never made the leap as we were traveling a lot that year. We got married in October 2018 and went on our honeymoon overseas. When we came home to an empty house, I knew it was time. We needed paws.

Did you have pets previously?

I (Susan) grew up with a plethora of animals and always had them in my life. My first dog was a rescue (we think we was part miniature collie and part golden retriever), second dog was a golden retriever rescue. We had two cats that were rescues as well, in addition to bunnies, guinea pigs, fish, etc. I went to college and adopted a Basset Hound, and also had a Neopolitan Mastiff who left me way too early. Thomas had a dog growing up, and shares a fond love for animals.

How did you hear about/decide to adopt from Karma Cat + Zen Dog Rescue Society?

We were looking online at rescues and saw Norman. We knew we wanted a black cat, as statistically they are not adopted as quickly. Funnily enough we were looking for an older cat (not a kitten), as we also know that older cats also have a tougher time finding homes. So in essence we were planning on adopting one, older cat and wound up coming home with two, young cats!

Describe when you first met Norman and Elliott and how you knew they were the right pets for you.

This makes us laugh just remembering. We didn’t know Norman had a brother that would come with him, but that didn’t phase us as our house is large and has more than enough space. Norman was splayed out on the floor looking for tummy tickles, and Elliott was bounding around full of energy (which is still true to his personality!) and eventually wound up sitting in my purse. We knew the moment we met them the four of us were meant to be a family.

Describe bringing Norman and Elliott home – how did the adjustment period go?

Our house was built in 1732 and while it has many separate rooms (not an open floor layout), it flows nicely and they absolutely love running through it and around. For the first few days we kept them in the upstairs guest room, so they can slowly acclimate to the new environment and to us.

Slowly is not the word Norman and Elliott had in mind though – they wanted OUT of that room and were ready to explore the rest of the house within a few days. We were hesitant to introduce them to the rest of the house so quickly … we didn’t want to overwhelm them. But they kept telling us what they wanted, so out they happily went. They were completely adjusted in a matter of days (less than a week).

We got them numerous cat beds but Elliott likes to sleep at the foot of our bed, and Norman likes to sleep on my sweatshirt. Although we are in the suburbs, we might as well be in the wild. We own a lot of land, and there are many wild animals constantly around the house. Tons of birds, chipmunks, turkeys, deer, rabbits and foxes. It’s a kitty wonder land for them. I call it cat TV, and one of their favorite things to do is sit in the window sills or their cat tower in front of the French doors and stare at all of the activity outside.

The next step was introducing them to my Basset Hound, Karl, who is now in retirement with my parents but comes to visit often. Karl is the sweetest, gentlest soul whose only downfall is his loud howl. I wish I had videotaped the first time he howled in front of the cats – did you know cats can look more perplexed than humans? They accepted Karl much better than I could have even hoped for. Elliott keeps trying to play with Karl, but I keep telling him the dog is 15 and those years are long past!

If applicable, describe any personality/behavior changes from since you brought your pets home, to now.

When we first got them, not knowing their past, we paid a lot of attention to their actions to make them feel as comfortable as possible. We were informed prior to adopting them that Norman at one point had broken his back leg, and he had not received medical attention for it. By the time Karma Cat had received them, it was too late. Elliott was certainly the adventurous one and was always looking out for his brother, Norman, who was very shy. Norman hid under an ottoman for a few hours when we first got to the house, and Elliott sat next to him while looking around. We nurtured Norman and were more gentle with him, whereas with Elliott we were picking him up and playing with him right away. Now Norman is running around like a wild child and seems very confident. They’re both very happy, easygoing cats who surprisingly don’t get into much mischief.

How would you describe Norman and Elliott’s personalities?

Elliott is our adventurous child. He loves to play and CLIMB THINGS. EVERYTHING. As I’ve mentioned our house is old, and we have these beautiful wood beams in the rafters. I’ve found him up there more times than I can count. The first time I saw him there I nearly had a heart attack. He’s on top of cabinets, boxes, clothing racks, anything up high – he is there. He loves to wrestle with Norman, and Norman tolerates it. He’s quite affectionate and loves to give head butts. He also likes to wake us up in the morning with a gentle patpatpat of his paw on you. I’ve tried explaining to him its 4:30 AM … he doesn’t seem to care, he’s just happy to see you and wants you to wake up and give him pets.

Norman has a squeaky, high-pitched voice that he doesn’t use very often. He is certainly a night owl, and gets the zoomies around 3 AM. He’s a creature of habit and still likes to sleep on my sweatshirt. He just last week found his interest in climbing things. He also really loves the water – to the extent we bought him a running (electric) water fountain. He loves to play in the sink when you’re washing dishes or your hands. He is more gentle when playing and has a favorite toy. He’s very affectionate as well, but in a different way. He’ll seek out scratchies behind his ears, and then will wind up splatting on the floor and now you’re there for at least fifteen minutes because who can say no to kitty tummy?

Please describe any silly/quirky traits Norman and Elliott have.

Elliott is very curious about everything, and LOVES packing paper. You’ll just see a little butt wiggle under the paper and then he’ll leap out pretending to attack whomever is walking past. He loves it … you can literally see the joy in his face.

Norman loves boxes. All boxes. Every. Single. Box. We get a guilt complex every time we have to throw out a box, he just loves them. He has his “designated box” that we keep in the kitchen, so instead of climbing on the counters while we cook he happily is plopped in his box. That’s a win-win.

They both are excellent hunters, as well. Being in an old house in the country, we have mice and crickets and moths. The insect and mouse population has significantly declined, which of course is fantastic. They love hunting and I love the extinction! I tell them they need to pay rent by killing crickets.

Please provide any additional stories or information that you’d like to tell us about Norman and Elliott.

Last winter was a rough one, and at one point we had a terrible storm with extremely high winds. The wind knocked down a large tree limb, which of course fell on the power line and we lost power (heat) for a few days. The four of us camped out upstairs in the only room that still had heat pumping to it, snuggled in. It’s one of my favorite memories because we had not had them for too long, and I think (I may sound completely crazy here…) that’s when they realized that we are there to love and protect them, provide them with a joyful, loving home and we will always keep them safe no matter what. They at first didn’t understand why they weren’t allowed downstairs, so we showed them how cold it was. And they got it … they understood. It was a bonding moment for the four of us, and will forever stand out in my mind.

I think I really just want to reiterate how much love and joy these two little loves have brought us. They follow us from room to room throughout the house if we’re moving around, and to be honest, if we haven’t seen one them in a few hours, we will go from room to room to find them. They are so good natured … they don’t bite or scratch at all, ever. They don’t overly meow and tolerate having their nails trimmed. The first time we brought them to the vet, the doctors and assistants were amazed at how gentle and easygoing they both were. So well behaved and we were beaming like two proud parents.

I’m convinced we were meant to find each other, and we couldn’t be more grateful that we did.

Interested in sharing your own Karma Cat + Zen Dog Adoption Tail? We want to hear from you! Click here to submit your story!